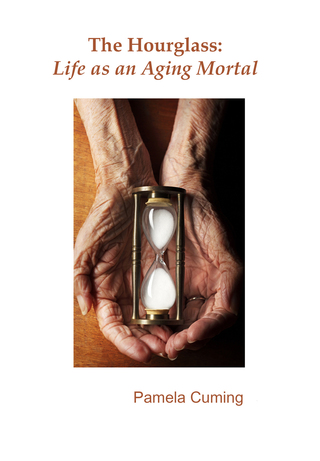 In the final chapter of The Hourglass: Life as an Aging Mortal, I introduced the Mortality Club. With this post, I hope to launch the club as a place where people can come together in a virtual world to talk about aging and about dying. Writing about aging and mortality has been a healthy and life-affirming experience for me. I believe talking with others about the experience of being mortal can have a similarly beneficial effect. I agree with the mythologist Joseph Campbell who said, “The conquest of the fear of death is the recovery of life's joy. One can experience unconditional affirmation of life only when one has accepted death, not as contrary to life but as an aspect of life.”

I envision our virtual meetings as open and honest conversations about our fears, our hopes, our struggles, our wins and our losses, and the ways we cope as we grow older and death draws nearer. I'll begin by introducing myself.


My name is Pam. Like most other mortals, I spent most of my life pretending that death was for other people. The blinders were ripped off one traumatic day eight years ago. I explain what happened in the opening chapter of The Hourglass.

“You could drop dead at any moment,” Dr. Hertz said as I followed him down the hall to his office after my annual stress echo. His pronouncement stunned me. I couldn’t respond. I could scarcely breathe. I feared I might fall down and die right there in the narrow corridor. I imagined he would keep walking, not even noticing that I no longer followed on his heels like a scared puppy.

"I treated my body like a sack of fragile eggs as I lowered myself into the chair on the other side of his cluttered desk. I listened without hearing as he recited the statistics that proved I was at risk of Sudden Death Syndrome. Stunned, I heard him decree that I must have a portable defibrillator implanted in my chest that would shock my damaged heart back into rhythm when it went haywire. The procedure needed to happen immediately.

"Death. It should not have seemed like such a stranger. I had been surrounded by its dark presence for months. Less than twelve weeks before Dr. Hertz read my death sentence, I had watched as a piece of my mother’s calcified aortic valve broke off and made its way into her brain, turning her into a demon possessed and bringing her one step closer to the final seizure that would claim her life. Then, on the eve of my mother’s funeral service in Perth, Western Australia, her sister, my beloved Aunt Jill, dropped dead on the other side of world.

" When I finally returned to my mountaintop home in the Pacific Northwest, I learned that my dearest friend, Katherine, had only months to live. A virus was devouring her brain.
Sitting next to her hospital bed, I had been aware that death hovered nearby, and yet I had not been afraid. After all, death was there for her, not for me. Weeks later, a single sentence spoken by a man in a white coat changed everything. I was not immune. Death was stalking me, too. At the age of sixty-two, I had finally come face-to-face with an adversary I could not defeat. I was genuinely frightened for perhaps the first time in my life. "

Now, I am seventy-one-years old, and struggling to remain resilient, optimistic and self-confident in spite of the respiratory and cardiac conditions that threaten to sideline me. I intend to keep fighting because I believe that the last part of life can present the biggest adventure of all. Finding out how to make the most of that adventure is the purpose of the virtual meetings of the Mortality Club.

To join the Club all you have to do is introduce yourself. You can use your real name or a pseudonym, as you like. Share with us a quote about aging or dying that inspires you. Or perhaps you have a book to recommend. Or maybe you have a story to tell. We'd love to hear it! Every weekend, I will post your thoughts, and share some of my own.
4 Comments

Dear Pam
I would like to join in the conversation. I am so glad that you are starting a virtual Mortality Club. I am a retired physician and have long felt that we need to bring death and dying out of the closet. It seems shocking that this is not part of our culture when let's face it, we are all terminal from the time we are born. No one has escaped death yet that I am aware of! I have seen too many of my patients facing their final time alone, silenced by the culture of well meaning hope and forced optimism, a culture that hides from the reality of suffering, of mortality. Our denial robs us of finding the gifts hidden in admist the loss and the grief; Meaning. Gratitude, appreciation, faith, courage.
I am reading your book and finding it so valuable. It is helping me examine my own fears and ways of coping with loss so that I might better help my patients and myself understand the difficult emotions associated with aging, loss of control and dying itself. Some of those emotions are useful but there are some pitfalls which your book illustrates so well. Looking forward to reading more.

A really terrific book is "Geography of Bliss" by Eric Weiner. Each chapter is a different country where the journalist seeks to find the happiest people. In the Great Britain (Slough, a town next to London) he mentions Cemetery Therapy. Highly recommend this funny and enlightening and extremely interesting book by a world-class journalist. Our awareness, rather than denial of death inspires us to live more fully in the present before we run out of time to make our contributions. He touches on this theme quite often in this book.

Hello Pamela, I'd love to become a member of this virtual club. Wonderfull idea! .I read about your book The hourglass on Facebook. I tried to find it in Bol.com. No luck , they don't have it. I will try Amazon now .I recently emigrated from the Netherlands to the Canary Islands wanting to spend the last part of my life( I am 80 now) in a warm climate. So what will be the next step in becoming member of this virtual club?

You are already a member of the club. Welcome. To participate just post when the spirit moves you. Tell us about an experience you"ve had as you confront aging. Perhaps share a quote that moves you. Or comment on another" members posting.