THE WAR OF THE AGES: The Old Phart and the Upstart 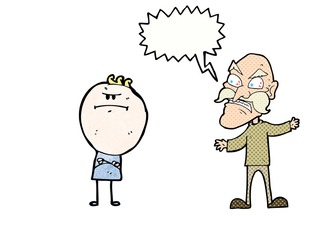 The Old Phart refuses to give in or give up. He or she will stand his (her) ground and yell and scream if necessary to be heard over the din created by disinterested and disrespectful younger people who want the obstinate old trouble maker to simply get out of their way. The Old Phart has a thing or two to say to the younger members of the group whom he views not as legitimate heirs to the throne, but as Upstarts who have not earned the right to rule.

Even when the experiences and expertise of an elderly person are relevant to the challenges a younger person is facing, there can be conflict. This happens when the once influential old man or old woman who sat on top of the chain of command now has no direct reports and no legitimate authority. Too often, that old man or old woman holds onto the demeanor and directive communications style that was once appropriate. He or she intrudes and tells the younger people in his world what to do and how to do it. The interference is strongly resented.

The tension between the Old Phart and the Upstart gets worse if the old guy (gal) is clinging to a position that the younger person wants. Older people increasingly refuse to go quietly into the good, good night. Because of medical breakthroughs and technology, their life spans are longer and they are healthier. In ever greater numbers, they cling to their positions in government, in industry, in the community. They take up seats that the young want to fill. Feeling the ambitious young breathing down their neck like people waiting for a table in a trendy restaurant, they get stubborn and resist leaving, ordering another cup of coffee. The young get frustrated and angry. In response, the old get more stubborn and resentful. The War gets nastier.

In his book, The Five Ages of Man, Gerald Heard described what happens when senior experience the negation of their acomplishments and the perceived irrelevance of their expertise. On page 154, he describes a “new class of elders.”

“The damage that, today, the rebellious young can do to the community is great. It is smaller, though, than that harm that can and must be wrought by the growing mass of a new class of elders who have a greater sense of political power and a deeper selfishness because they have a more profound, far better founded hopelessness and fear toward a tomorrow that holds for them no promise, only negation.”