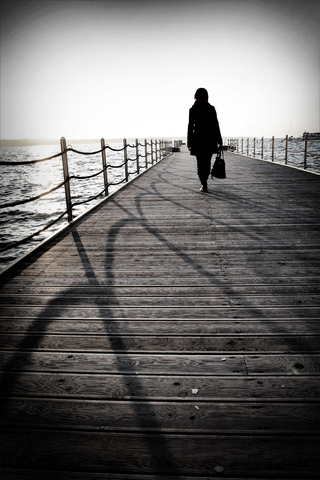 I wrote Widow’s Walk when I was thirty five years old. Tracing my first year’s torturous journey after my husband died of a heart attack was an attempt to come to terms with death and its aftermath. Now, at the age of seventy-one, I am attempting to come to terms with the challenges of aging and, as the runway of my life gets shorter, the certainty that I will die. I wrote The Hourglass: Life as an Aging Mortal to describe this part of life’s journey. Many who have read that book urged me to republish Widow’s Walk. This posting is taken from the Preface I wrote for that new edition.

Although it was a difficult and sometimes heart-wrenching process, I believe it is even harder to lose a spouse when we’re older than when we are young and the future is filled with the sense of potential. The experience of several of my close friends who have recently become widows and widowers has convinced me this is true. When we are older, we are less resilient. The are fewer paths open for us to discover. Our energy levels are lower than they were, making it harder to explore the new paths that do present themselves. There are fewer candidates who can or want to fill our empty chair. We may not even want them to do so, peferring to content ourselves with the memories we built over the years with our dead mate.

And yet I have learned that the commonalities inherent in the experiences of the young and the older widow and widower are far more important than the differences. As I explain in The Hourglass, the word “widow” is derived from the Indo-European widhwe which means to be empty, separated, vacant. Regardless of your age, when death claims the life of your mate, it claims a part of you, too. You experience a void within yourself, an emptiness that can never be filled. Though you continue to breathe, and your heart continues to beat, you feel as though the life force that used to flare within you has become a mere flicker that can barely sustain you as you struggle through your days.

When my sixty-year-old neighbor’s husband died of multiple myeloma, I gave her a copy of Widow’s Walk. In an email she wrote to thank me, she said, “We are the walking wounded, wandering lost in a landscape no one talks about; one we never imagined for ourselves. Thank you for shining a light on that rocky terrain so that we can keep on picking our way carefully out of the shadows.”

Widowhood does feel like walking through the land of the shadows. The world is blurry. Normal conversation about mundane subjects is strained and tedious. Time moves slowly. The days are endless and the nights are even longer. You struggle to reach through the shadows and grasp something real, but there is nothing there. This is true whether you are thirty-five or seventy-five.

It’s also true whether you are a widow or a widower. In A Grief Observed, C.S. Lewis wrote about his feelings and sensations right after the death of his wife. “No one ever told me that grief feels so like fear. I am not afraid, but the sensation is like being afraid...At other times it feels like being mildly drunk, or concussed. There is a sort of invisible blanket between the world and me. I find it hard to take in what anyone says. Or perhaps, hard to want to take it in.”

The loss of a mate can threaten our identity, our sense of who we are. “I am Mrs. John Smith” is a statement of who I am only as long as John Smith exists as a force of nature. When he no longer is, then the same statement, “I am Mrs. John Smith” lacks all substance. It defines nothing. “I am John Smith’s widow” provides a better definition of who I have become, but, it is dependent upon John’s identiy; an identity that death has now rendered static.

Joan Didion expressed it beautifully when, at the age of sixty-nine, her seventy-one-year-old husband, John Gregory Dunne, suffered a massive heart attack and dropped dead at the dinner table. “Marriage is not only time: it is also, paradoxically, the denial of time. For forty years I saw myself through John’s eyes. I did not age. This year for the first time since I was twenty-nine I realized that my image of myself was of someone significantly younger…We are imperfect mortal beings, aware of that mortality even as we push it away, failed by our very complication, so wired that when we mourn our losses we also mourn, for better or worse, ourselves. As we were. As we are no longer. As we will one day not be at all.”

Surviving the journey through the shadows requires that widows and widowers of any age open themelves to all phases of the grieving process: the guilt at things said or unsaid, the anger, the despair, the regrets, the fear of being inadequate to handle life’s demands on our own. It demands that we face the overwhelming sense of being alone, and the anxiety and depression that can ensue. Emerging on the other side requires that we develop a new sense of identity; a coherent picture of the new me; the newly confident me that can embrace new goals and dreams.

For the cover of this edition of Widow’s Walk, I chose an image of a woman walking alone toward the end of the pier. To me, the image symbolizes the widow’s and widower’s psychological reality. The expansiveness of the sea represents the void within, the overpowering sense of emptiness we feel inside. The walk down the pier reflects the search to find a new self after a soul wrenching loss.

Note: The new edition of Widow’s Walk should be available on Amazon by the end of September.
Be the first to comment