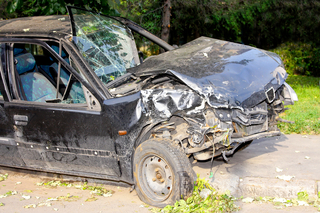 I have been watching a television series entitled Strange and Unusual Deaths. The dramatized tales are based on true stories. All of the deaths are so strange as to be literally “unthinkable.” For example, envision a healthy thirty-year-old girl in her one room apartment on the 22nd floor of an apartment building in one of New York City’s better neighborhoods. We’ll call her Livia. It’s late afternoon and Livia had just laid down for a well-deserved nap. Deep under the street below her window workers are attempting to repair a leak in a steam pipe that provides heat to all of the buildings in her neighborhood. One of the workers neglects to empty out the water that had accumulated in the pipe before turning the steam back on. When the boiling steam hits the water, it creates a huge pressure that blows a violent river of boiling steam, rock and debris straight into the air. The rumbles awaken Livia. She sits up in bed and looks horrified as the blast rips through her window. Flying debris and rocks attack her body like shrapnel from a dirty bomb. She dies an unimaginable death.

In another story, a young man is with his friends at the beach. He is running to catch a football, and falls into a sand pit made by other beach goers. As he hits bottom, the weight of his body makes the now dry walls of the hole crash in on top of him. He is quickly buried under an avalanche of sand. When his friends come looking for him, they can see only the tips of the fingers of his right hand. They jump into the pit and frantically try to dig him out. Their weight just makes the problem worse. By the time help arrives, he is dead.

A friend of mine was married to James, an optimist with a constant smile and an entrepreneur who ran a roofing company. They lived in a three-story brick house with a steep gable slate roof. In spite of the fact that the slate shingles would occasionally loosen and require attention, James loved that roof. He thought it set their house apart from all the others in their neighborhood. And, he thought nothing of climbing onto the roof himself. After all, that’s what he did all day long, and had done every day for more than two decades. Susan, a nurse, didn’t worry when James went up on the roof. Although he was a big man, he was very sure footed and cautious.

I’ll take a little dramatic license as I tell you about the day the unthinkable happened. Susan had to leave for work early. As she was preparing to leave, James said, “I’ll be heading out to a job in the county after I take a look at our roof. I want to make sure none of the shingles are loose. The rains are coming and I don’t want to spring a leak.” Susan smiled, kissed him, and said, “I think you love that roof more than you love me.” Then she laughed, and walked out the door.

She got home at around four o’clock in the afternoon, and was surprised and pleased to find James’s car in the driveway. She went into the house, and called his name. “James, I’m home!” When he didn’t respond, she assumed he was napping or in the bathroom. She took off her coat and wandered into the kitchen at the back of the house to make a cup of tea. Looking out the back window, she noticed something was not right. The ladder that James used to climb onto the roof was still in place. He can’t still be up there, she thought as she opened the door to go out to the back yard.

She saw him immediately. He was lying on his back. His arms and legs were splayed out like those of a rag doll that had been thrown to the ground. His eyes were open. She screamed, “James!” and ran to him. Even as she crossed the lawn, she knew that he was dead. The unthinkable had happened. James had fallen three stories to his death.

These deaths are “unthinkable” because the victims were healthy and engaged in presumably “safe” pastimes or daily routines when their untimely deaths occurred. But it is precisely because the circumstances surrounding the deaths were so unremarkable that we regard them as “unthinkable.”

Joan Didion writes about this dynamic in The Year of Magical Thinking. She and her husband, the writer John Gregory Dunne, sat down for dinner one evening. As was their custom when they were alone, they built a fire in the fireplace in the living room, and sat down for dinner in front of it. Joan made John his traditional drink: single malt scotch and water. They talked for a while, and then she served dinner and gave John his second drink. He spoke about the virtues of single malt scotch, and then began to talk about why World War I was so critical in terms of what would follow. While she mixed the salad, Joan listened. And then suddenly, John stopped talking. Joan looked over and discovered him slumped in his chair. Thinking he might have choked, she tried to lift him, but failed. He fell forward, hitting the table, and then falling to the floor. The paramedics were unable to revive him. In the midst of an unremarkable dinner, he had died from a massive cardiac arrest.

Joan had a very difficult time accepting that it had happened. She writes, “It was in fact the ordinary nature of everything preceding the event that prevented me from truly believing it had happened, absorbing it, incorporating it, getting past it.” (The Year of Magical Thinking, Random House, New York, page 4.)

My mother, Rosemary, had a similar experience when my father died. That day, my parents were returning from the Porongroups, a mountain range near Albany in southwest Australia. My parents owned ten acres on the side of a mountain where my father was building a holiday house. It was a lovely day for a five-hour drive back to Perth. He drove and my mother alternated between her knitting and reading a book. Unfortunately, they decided to skip their normal stop for coffee in the fly-ridden outback town of Williams. My youngest sister was expecting her first child, and they were eager to get home to receive the news.

Meanwhile, an elderly lady was driving her van in the other direction. She was bringing her husband back to Albany after a medical appointment in Perth. An impatient young driver had tailgated and honked his horn, intimidating her and forcing her to move into the oncoming lane of the two lane dirt-covered highway. Just as she approached the crest of a hill, my father’s car also climbed the hill but from the opposite direction.

Seeing that there was no way to avoid a head-on collision with the van, my father turned the steering wheel, putting his own body in the direct path of the oncoming vehicle. He died on impact, but managed to save my mother’s life. It took her three years to, in her words, get past of sense of numbness that pervaded her being. She had an insatiable need to tell everyone anyone about the accident. “Had we stopped for coffee, it wouldn’t have happened,” she would say. “He would be alive today. I just can’t believe it.” It seemed as though in the telling, she was trying to make it believable, or “thinkable.”

While every death represents a tragic loss for the people left behind, some deaths are more “unthinkable” than others. Somehow the more unremarkable, the more routine and ordinary the circumstances are in which a death occurs, the more difficult it is to accept. There’s an incongruity that our minds simply can’t handle. I begin to believe that while sudden, unexpected death is probably kinder to the dying, it is much harder on those who are left behind. A more prolonged death is harder on the dying, but allows the living to pre-grieve and, thereby, renders believable the unbelievable.