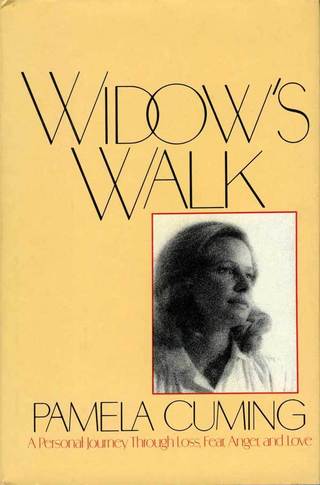 Excerpts from Widow’s walk: A Personal Journey through Loss, Fear, Anger, and Love

I was looking at the back porch, at the scene of our last family dinner together. Wet hamburger buns and soggy ears of corn were all over the floor. The charcoal was rain-soaked. The cotton cushions on the chairs and the chaise lounge were soaked through and probably ruined. The rocking chair that belonged in Bill’s and my bedroom was on the porch, moving with the wind, its cushions falling off with the weight of the water they had absorbed. Devastation seemed to be all around. It was not a normal night. It was the most terrifying night of my life. Nothing would ever be set right: not the cushions, not the rocking chair, and not my life.

I felt very, very tired. Too tired to stand up. And yet I knew that we couldn’t stay where we were. As long as Bill lived, we had been invited guests at the hospital. Suddenly I felt as though we had overstayed our welcome; that our little room was no longer ours. Checkout time had come and gone, and the owners were waiting to make the room ready for other visitors. It was not that the nurses were unfriendly or hostile; it was just that there was nothing more to be said or to be done. We got up and walked out into the emergency room itself. I had to struggle not to vomit as I walked past the closed curtain behind which I knew lay Bill’s corpse.

Opening the door, I entered the room and felt a force, a presence like nothing I had ever before experienced. I had not been in the bedroom since the emergency medical crew had pulled me away from Bill. That seemed like an eternity ago. Bill’s down pillow still showed the imprint of his head. The throw that had covered him was still in a heap on the floor. His slippers were positioned neatly beside the bed where had had place them when he lay down. The essence of Bill was very much in that room. I could smell him, sense him, and wanted to touch him. Oh, I so very much wanted to touch him. I couldn’t stay there, unable to lie down on my side of the bed, unable even to open the dresser drawer to get my nightgown. I couldn’t change anything about that room. I had to shut the door tight, as if to capture the presence that existed therein. Closing the door, I went to lie down in the guest room.

Things were happening; a strange momentum had begun. People were scurrying around, taking care of problems before I even realized they existed. Over the past few months, I had been functioning as head of the business and head of the household. I had gotten accustomed to teasing out incredibly complicated logistics on both fronts and then issuing directives to everyone in sight. I think I had begun to assume that, without my directives, the universe would have broken apart. Now, suddenly, I was not the boss-lady, but the weakened child who had to be guided through the day. For a moment, my contempt for the ability of others surfaced, and I panicked at the thought of losing control.

The lid opened. Instead of the fine light gray powder I had expected to see, there were pure white, stone-like pieces. The wind could not have borne these ashes. They were not ashes. I began to pour the contents of the can into the water. The pieces sunk to the bottom and attracted a multitude of tiny fish. At first the sight of the fish horrified me. Then Melissa cried out, “Look, Mommy. They’re picking up Bill and carrying him to the sea!” Children are amazing. Melissa had managed to understand all that had escaped the rest of us. We did not have to fight nature and God. They were, in fact, helping us free Bill. Her words stifled my horror and triggered my faith and hope. I began to pour in a wider and wider circle. Some of he pieces got stuck on a mossy rock, and I bent down and brushed them off. I had touched the substance. I had touched my husband’s bones. In the touching, I became no greater and no lesser than the tiny fish. Like them, I was simply an instrument of God, one element in a vast ceremony.

I am a winner. I lost a man I loved, but I am still a winner. I loved someone deeply, and my loss was intensely painful. But I would not have done it differently. I am sorry, deeply sorry, that Bill had to die. But I am joyful that I knew him, and that I loved him. The joy far outweighs the sorrow. If it did not, I would probably be sorely tempted to refuse to get deeply involved again. I will not so refuse. On the contrary, I hope very much that someone enters my life who I can love. I may lose again. That is a risk that I will have to take. But if I can learn from the loss and gain in self-insight and in the understanding that I have of people and of living, then even if I lose the relationship, I will not have lost as a person.