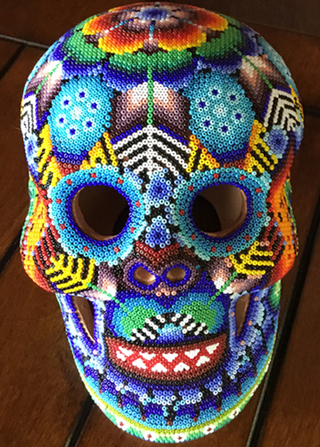 In Mexico there is a widespread belief that we die three times. The first happens when our hearts stop beating. The second occurs when our bodies are buried in the ground and we are no longer in sight. The third and final death happens when our loved ones have forgotten us.

The Mexicans try to make sure the final death never takes place. On November 1 and 2ndof each year, they celebrate the Day of the Dead. The celebration is joyful with an emphasis on honoring the lives of departed ancestors rather than on attempting to pacify malevolent spirits.

The tradition is an old one. All the ancient Indian civilizations of Mexico celebrated El Dîa de los Meurtos. Their celebrations were held in August, and continued throughout the month. In the fifteenth century, the Spanish Conquistadors converted the locals to Catholicism. As part of their attempt to get rid of what they regarded as pagan traditions, they moved the celebration of the dead to November 1 and 2nd, so that it would coincide with the Catholic All Saints and All Souls days.

The change in date hasn’t muted the passion of the festival, nor lessened the time, energy and resources devoted to its preparation. The planning process occurs throughout the year. The fall is devoted to gathering the foods and goods that will be offered to the dead. At the end of October, families gather to clean and decorate the graves of their loved ones with wreaths of marigold and other offerings. Adults are given bottles of tequila, mexcal or atole. Toys are left at the graves of the “little angels,” the dead children. Sugar skulls often inscribed with the names of the deceased on the forehead are prepared, and eaten by a friend or relative in a passionate and joyous ritual designed to commenorate and remember their dead loved ones.  Read More
1 Comments

Beautiful photo. Love this piece and want to send it to my Mexican friend in Del Rio, Texas. Since I don't know how, I will tell her how to look it up online. Also, remember those photos they used to take of family members in the coffin. Photos that were preserved in albums? And remember when they used to snip hair from the corpse and make designs with it that were subsequently framed? I've seen these in some plantations here in Louisiana, still hanging on the wall.