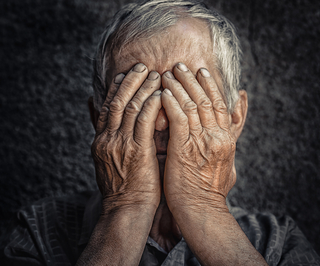 Shame afflicts far too many older people. What is shame? Humiliation and embarrassment are two of the synonyms that come to mind. When we feel ashamed, we begin to think that we are unworthy—unworthy of love, of respect or even of sympathy. Doubting our own worthiness, we begin to lose confidence in ourselves. Our self esteem decreases. We feel unempowered, vulnerable and exposed. A vicious cycle ensues. We start to behave like victims, thereby inviting disdain, disrespect or abuse at the hands of people who prey on the weak.

Why is shame an affliction of the old? Unfortunately, there are a number of reasons; so many in fact, that it’s surprising some of us manage to escape the affliction. In a culture that prizes youth, we can feel ashamed of having a body that is deteriorating and can no longer perform as well as it once did. In a society that applauds the strong and independent, we can feel ashamed of needing the help of others. We tough it out, pretending that everything is under control when, indeed, it is not. We can feel ashamed of getting sick, and even of dying.

These are sources of shame that we can control by teaching ourselves to think differently. We can learn to love and respect our aging bodies. We can stop ourselves from engaging in a double blind, and lying to our children about how we feel and how we are coping with the demands of daily living. We can stop blaming ourselves for getting sick, and cease regarding dying as a failure to live.

It’s the other sources of shame, the con artist and the abuser, that are harder to combat. The only antidote is to avoid them in the first place. In a world filled with greed, a sense of entitlement, and a belief that the old are fair game, that is increasingly hard to do.

Consider Janet, a sixty-four-year-old church secretary who joined an internet dating site. Within weeks she was thoroughly wrapped up in the digital embrace of Gerald. A self-described German businessman, he wanted a “confident” woman to become his life’s companion and accompany him to all the exotic destinations he hoped to visit. Unable to withstand the constant barage of embracing emails, text messages, and phone calls, Janet gave in to the fantasy that Gerald had created. He was “her man.” When he then began to experience difficulties, such as being hospitalized in Ghana, she didn’t hesitate to lend him a financial helping hand. By the time she realized she was being deceived, she had sent him more than $300,000 and depleted her life savings.

Unfortunately, there are thousands of stories like this. According to the Federal Internet Crime Complaint Center, in the six months ending Dec. 31, 2014, nearly 6,000 people reported losing $82.3 million in such confidence fraud schemes.

And this represents only the tip of the iceberg. Most seniors who fall prey to a scam are too ashamed to admit it, much less to report it. “Most victims say they are embarrassed to admit what happened, and they fear that revealing it will bring derision from their family and friends, who will question their judgment and even their ability to handle their own financial affairs.”


If we are ashamed when we are conned by strangers, how much greater is the feeling of humiliation when we allow ourselves to be financially abused by people we know; people whom we have learned to trust. Consider the apparently humble priest who administered to the souls of lonely widows living in a wealthy enclave in Southern Florida. Father Hudak managed to convince a number of elderly women to give him cash and even to sign over property. One of his victims ended up giving him almost all of her money. Unable to afford her assisted living facility, Dorothy had to move across town to a modest retirement home. When she realized she didn’t even have the funds to cover her rent there, she asked the priest for help. He refused. Her feelings of shame were so great that, rather than confess to her sister, she tried to kill herself.

Stories of caregivers who prey on the old are rampant. The strategy is similar to the romance con and the priest con. They shower their victims with attention, going beyond the call of duty to make sure their every need is satisfied and every wish is fulfilled. Once they have established trust and a feeling of dependency, they pounce. They talk their victim into giving them signing authority on their checking account, or authorizing them on their credit cards, or providing them with the password on their debit card. “I need you to do this so that I can make sure we have the groceries we need.” “I need you to do this so that once in a while I can get you a special treat.”

As the bond grows stronger, the caregiver’s demands increase. “I’ve been good to you, and now I need you to be good to me. My old car just won’t run another mile. I need your help to buy a new one.” “My mother is sick, and I had to send her all my money. I need your help to pay my rent.” By the time the abuse is uncovered, the victim will have incurred both a significant financial loss and a sometimes unrecoverable erosion of self esteem.

I believe the closer the abuser is to the victim, the greater the psychological damage. Why? Because the feeling of betrayal is intensified. It is sobering to realize that the children of men and women over the age of sixty accounted for thirty-three percent of the reported cases of financial exploitation. An additional twenty-two percent were committed by other close family members (e.g,, siblings). This often took the form of abuse of the financial power of attorney.

Consider the tragic case of Miriam. A spry, independent older woman in her early eighties, Miriam fell and broker her hip. Understanding that her recovery would take months, she gave her power of attorney to her daughter, Katrina. When Miriam’s son returned from his job as engineer in the oil fields of Saudi Arabia, he discovered the abuse. Katrina had already spent three-quarters of her mother’s assets. Because the funds had been spent to cover the daughter’s exorbitant credit card bills, they were unrecoverable.

The Miriam who was finally discharged from the rehab center was a totally different person that the woman who had entered the hospital three months earlier. She felt ashamed to have to rely on her son for financial help. She berated herself for showing such bad judgment, and for putting her faith in a daughter who had never demonstrated any fiscal self discipline. She had begun to doubt her ability to manage her own life. Miriam died within a year of being discharged. The fall didn’t kill her. Shame did.