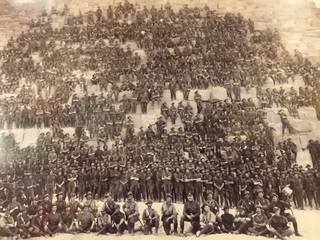 December 20, 1914
During one of our trips to Australia, my husband David found in an antique shop a poster sized photograph taken of the 740 Australian men who volunteered to fight during the First World War. These farmers, shopkeepers, and others who had never served in the military but shared a strong sense of patriotism were sent to Egypt for training. The day before they were due to depart for the front lines in Gallipoli, they had their picture taken on the Pyramid Cheops.

The photograph hangs in a small room off our den that we call the archive room because it houses all our family photo albums, and because one wall is devoted to photographs of my family. (The room also doubles as a wine storage room, and repository for history and reference books.)

I was in there the other day looking for a bottle of wine and got distracted by the photograph which David framed and hung on “his” wall –– the one we had dedicated to his family photos. My attention was drawn to the two soldiers who had been propped up against the wall of the pyramid by their buddies. They had died in the infirmary the day before. Because they were a part of the valiant 11th Battalion, they didn’t want them to be forgotten. It was to become the last visual record of eighty percent of them. Only 144 survived that bloody battle.


In propping up their dead buddies and staging them to make them appear as though they were still part of the living, the soldiers were maintaining a tradition that dates back to the Victorian era. It began in earnest with the invention in 1839 of the daguerrotype, the earliest form of photography. It allowed the members of the middle class who couldn't afford to have portraits of their dead ones painted to create another kind of visual memory of their dearly departed.

In the photographs, the dead were often posed to look as though they were still among the living. Adults were seated in chairs with their eyes propped open. Dead children were posed on couches or in cribs, and appeared to be sleeping. Sometimes their pupils were painted onto the print to make it look as though they were still alive. Other living members of the family were often photographed with the dead.

Today we look at these photographs and think of them as morbid or macabre. I agree those that attempt to pretend that the dead are still alive can be disturbing. Others, however, create the feeling that only a thin veil separates the living from the dead. To me, these represent a reverence for life, coupled with the desire to remember things past.

I know a family who recently lost a baby boy at birth. The fetus’s heart had not developed properly, and he died within moments of taking his first labored breath. Regardless, he had been loved in the womb, and regarded as a member of the family even before the moment of his birth. The mother and father named him Samuel. They bought a tiny coffin, a plot in the cemetery near their home, and a headstone. At the service, the mother held the baby who appeared to be sleeping. She clutched Samuel next to her breast as their minister recited prayers. His ten brothers and sisters participated in the service for a child they all had come to regard as their little brother. Photographs were taken of the mother with the dead child. These photograhs will insure that Samuel, who lived on this planet for less than five minutes, will long be remembered.

I am suggesting that it might be healthy to create visual memories of our deaths Photographs are posted of babies moments after they leave their mother’s womb and utter their first cry. Why are there no photographs of their deaths? Perhaps because we have learned to celebrate birth, and to fear death. Because we would rather deny it, we choose not to record it, and yet the moment of our death is equal in importance to the moment of our birth. We create visual records of even the most mundane moments of our everyday lives and yet we don’t take photographs of our loved ones as they lie in an open coffin. We don’t gather around the coffin for one last family photo. Instead, we fill the funeral parlor with prints of our loved one while they were living, loving and laughing. In doing so, we reveal that we don’t or can’t accept that death is fundmentally a part of life.

In doing so, we miss an opportunity to honor the memory of our loved ones by reflecting on their deaths as well as their lives. I cling to the vision of my mother in her pink silk suit lying with her arms folded in her coffin. Her white hair softly framed her face, calm and quiet in its final repose. Each year the visual memory grows dimmer. She was beautiful in death as she had been in life, and yet no one, myself included, thought, or perhaps dared, to take a photo.
Be the first to comment