Dying to be With You 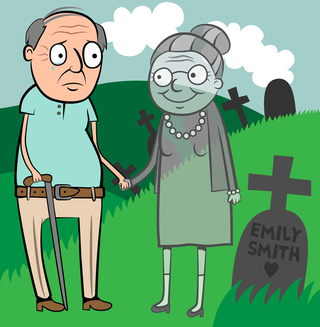 The Hindu ritual known as Sati during which the widow throws her body on the flames that are turning her husband’s corpse into ash is rarely practiced today. It was prevalent when the role of a Hindu woman was solely to service her man. When he died, her reason for living disappeared. She was declared in-valid, irrelevant, as though already dead. Grief so consumed her that she already felt like her flesh was already on fire. Jumping into the flames held no terror; only the promise of reuniting with her mate.

The ritual of Sati has beome virtually non-existent. That’s happened, in part, because widows are no longer regarded as in-valids who have lost their reason for being. Widows are no more likely than widowers to die, or to want to die, as a result of the death of their mate. The sense of loss that overwhelms when a loved one dies, is not gender-specific. It afflicts both men and women. And, it is not age-specific. Both young and old can be so consumed by grief that they choose to die rather than to live without their mate.

The story of Romeo and Juliet comes to mind. In Shakespeare’s play, both Romeo and Juliet died to be with the other. In order to avoid having to marry Count Paris, Juliet asks the Friar to give her a potion which will put her asleep and make her appear to be dead for forty-two hours. Unhappily, the Friar is unable to get the message to Romeo in time. When Romeo learns that his Juliet has died, he kills Count Paris and then drinks poison he has gotten from the apothecary. When Juliet awakes and finds Romeo dead, she is overcome with grief. Wanting nothing other than to reunite with her mate, she stabs herself to death with his dagger.

Older people do not have to resort to poison and daggers. The effect of grief on an aging heart can be enough. I have a friend who is in deep grief over the death of her parents. She maifests that grief by posting on Facebook on almost a daily basis photographs of the two of her parents taken at various points during their fifty years of marriage. My friend’s grief is particularly intense because she never expected to lose both parents in such a short period of time. She was somewhat prepared for her mother’s death. She died of heart failure in early June. My friend was totally unprepared for her father’s death. At seventy-nine years of age, he had no real health issues. He still fished and played golf. My friend thought he would be with her for many years. On the 21st of July, he was hospitalized due to a persistent debilitating fatigue. A week later his heart stopped. My friend believes he died because he didn’t want to live without his beloved wife. In a real sense, he died in order to be with her.

Is theirs a tragic story? Or is it a story of a romance that was so strong even death could not destroy it? Perhaps it contains elements of both. More tragic is the story of a mate who dies because of the demands of caring for their dying spouse. The other edge of the two-edged sword known as a “good marriage” reveals itself when one of the spouses gets sick or is disabled, forcing the healthy spouse into the role of caregiver. The relationship that was once a source of sustenance and support now becomes the major stressor in the life of the healthy spouse.

When this happens, it can feel like the very ground on which we are standing has suddenly become unstable. The spouse who was once a Celebrant, a resilient optimist, becomes a despairing victim, a whining and pessimistic Castaway. Her Warrior spouse whose adversaries once took the form of scaling mountains and skiing glaciers now has to do battle with his mate’s bodily fluids and endless complaints. It’s a battle he knows he can’t win, and yet it’s one of the toughest he has ever fought. He finds himself caught in a relentless emotional cycle as he begins to resent the mate he once adored, and then feels gulty about his resentment. He stops exercising. He stops eating properly. He sleeps poorly. He becomes depressed. Involutional melancholy takes hold, making it even more difficult for him to function as the caregiver. Finally, his immune system is so compromised that he catches the pneumonia that she has been fighting. The patient and the caregiver die within days of one another. Though she didn’t mean to, she has taken him to the grave with her.

Their story is a tragedy; he died to be with her, but not because of his own volition. He was trapped by her endless demands, lack of another caregiver who could have given him respite and encouraged him to take care of himself, and by the falling away of a sense of community that once provided a physical and emotional safety net for those members who were facing major life challenges. In the world in which we live, the tragedy of one spouse dying to be with the other is bound to proliferate. Hundreds or even thousands of miles separate family members, denying older couples that source of support. Notions of marriage such as “You and me against the world, Baby,” and “Nobody really loves us like we love each other,” make the unit stronger during times of health, but isolate the caregiver during times of illness. The exorbinant price of long term care and short term at-home-care magnify the problem, and make it more likely that the once healthy spouse will follow his or her mate to the grave.

“She followed him to the grave.” “He died of a broken heart.” These statements threaten to render meaningless the marriage vow, “Until death us do part.”