The War of the Ages 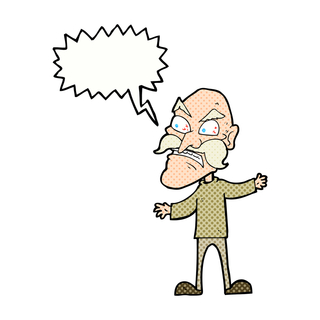 Young people want to talk about their hopes and dreams for the future, or the great adventure or good time they’re going to have on the weekend or during vacation. Many old people only want to talk about their latest medical report, and their fears about what comes next. Young people look forward to trying new foods or having “fun foods” (translate: junk foods) with their friends. Their elders, meanwhile, dwell on all the foods they can’t eat for dietary reasons.

Evidence of the war lies in the terms used to describe older people: dirty old man, smelly old lady, crusty old man, crotchety old lady, curmudgeon, old phart, old fogey, old fuck, geezer, crone, codger, dotard. Attractive, aren’t they? All of them imply that the older person is, at best, eccentric and, at worst, a nasty piece of work to be avoided if possible.
What do the pejorative terms connote? What kind of behavior prompted them? A geezer is eccentric, and laughable. A codger is trapped in his old fashioned ways and tries to impose them on others. Old fogies are people who just don’t get the point because their ideas are too conservative or old fashioned. Better to be a codger or old fogey, however, than a dotard.

A dotard is an old person who is senile or stupid. We take pity on the dotard almost as much as we do on the poor old lady. I’d rather be regarded as a poor old lady than her nasty, ugly sister, the old crone. Then, there’s the old fool. They are silly, shallow and practiced at feigning innocence to get others to do their bidding. Inducing guilt in caregivers is a favorite game.

A curmudgeon is a bad tempered or surly old person of either gender. Curmudgeons are crusty, outspoken and irritable. They use their considerable brain power to make snide remarks about just about everything going on around them. Then there’s the old phart - an old person whose tastes are out of date, whose ideas are old fashioned, and whose thoughts are such a waste of time that nobody wants to hear them. An old fuck requires no explanation. To be called a “fuck” is an insult at any age. To be called an “old fuck” is tantamount to declaring someone as undesirable as excrement on the bottom of a shoe.
Older people have developed an almost equally impressive lexicon to describe younger generations. They are rebels, irritants, incompetents, ingrates, know-it-alls, or, my favorite, little pieces of shit. Younger people are regarded as reckless and irresponsible takers. Their sense of entitlement frustrates older people who believe they’ve earned their stripes and expect younger generations to do the same.

The under-thirty-somethings feel they deserve respect, and yet they often fail to show respect for the accomplishments of the elderly. Older people who might otherwise provide sage advice are ignored. Their expertise is dismissed as irrelevant. The traditions they attempt to guard are aborted. Their tales of the past are unwelcome. Many are quickly forgotten by the institutions and organizations to which they gave their most productive years. This is true even of the men and women who made it to the top of their respective pyramids. Let me give you an example.

Neil Gilliatt once held the esteemed position of Chairman of the Executive Committee of the Interpublic Group, a global provider of “marketing solutions” (advertising, public relations, etc.). With sadness, I recall one afternoon only two years after his retirement. We were going to meet with the man who had been the Chief Creative during Mr. Gilliatt’s long tenure, and still held that post. When we got to the front desk, Mr. Gilliatt smiled and identified himself to the young receptionist. When she showed no sign of recognition of either the face or the name, he repeated, “I’m Mr. Gilliatt, Mr. Neil Gilliatt.”

“Yes, Sir, I heard you the first time,” she said. “I’ll call Mr. M. and see if he’s available.”
I watched as Neil’s visage changed from confidence to hurt to bewilderment. He said little during the meeting that followed. I was tempted to call their head of human resources and remind her that a critical aspect of shepherding the corporate culture is to make sure newcomers understand its history and traditions. If that doesn’t happen, both the old timers and the newcomers lose.

The War of the Ages is real. It’s fueled by tensions over pace, risk taking, money, responsibility, focus, and, underneath it all, the differing perspectives about mortality and the importance of honoring our ancestors. What’s to be done? The first step is admitting there is a war and then talking opening with the young people in our lives. Only if we do so can we begin to understand their perspective, and help them to appreciate our needs, hopes and expectations.