Easing the Fear of Dying: Imagining the Good Death 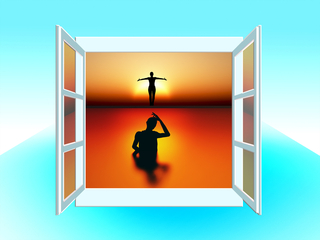 I have just finished reading a remarkable book; so remarkable that I gave it a five star review on Amazon and Goodreads. I rarely give five star ratings to anything. I believe if we have to be stuck in this morass of peer review (as opposed to expert review), then at least we can maintain high standards. Katie Roiphe’s exploration of great writers at the end of their lives deserves all five stars. The Violet Hour evokes and provokes. It disturbs even as it soothes. It talks about the author’s decades-long attempt to get comfortable with the thought of dying. She concludes that the best we can do is to “get along with the fear.” 1

I believe it helps to “get along with the fear” by imaging a good death. My idea of a good death is lying in my bed, closing my eyes, and imagining myself on a white raft that is slowly moving further out onto an immense body of deep blue, calm water. I imagine myself floating forever. In short, my vision of a good death is dying in my sleep.

That imagining does not completely quiet the terror. Sometimes, I still wonder if I died in my sleep, would that part of me that is not matter, but pure energy (the soul or consciousness) experience myself as awakening in the morning as though nothing has changed? If I was unaware of dying, would I remain unaware that I was dead? Would I then be caught in a ghost-like state half way between the living and the dead? That is more horrifying than the fear of dying.

Perhaps that is what my friend Katherine believed. She died of a very nasty viral infection of the brain called PML, or progressive multifocal leukoencephalopathy. It took only four months to kill her. At the end, she was afraid to go to sleep; afraid that if she did, she would never wake. Sadly, or happily, that is exactly what happened.

In The Violet Hour Katie Roiphe explores the way Sigmund Freud approached his last illness. Dying of throat cancer, he refused to take any pain medication stronger than aspirin. He wanted to die heroically, and believed that doing required remaining mentally clear until the end. Freud had spent a lifetime analyzing the human condition, and was determined to apply that rational mindset as he dispassionately analyzed even his own last moments on this plane of existence. The good death Freud imagined was one that involved “heroic clarity.” It was clarity of the rational part of our being, not the emotional. Even at the end, he admitted “at bottom no one believes in his own death.” As Katie Roiphe points out, “heroic clarity” is more of an ideal than a possibility.

Most of the people I have known who died of cancer have not aspired to “heroic clarity.” In fact, quite the opposite is true. Bill asked his wife, a former nurse, to keep turning up the morphine. He preferred the absence of pain (both physical and psychological) to clarity. Others turn to medical marijuana in a search for the out-of-body experience which will make the thoughts of the end of the body and the pain of its deterioration more tolerable. For these people, the imagined good death is one which is free of pain and anxiety. That imagining helps them quiet the terror and live with the fear of dying.

Others put their emphasis on exerting control over the timing of their own demise. Dying of bladder cancer, Mike asked his doctors to give him pills which would put him to sleep and cause his death shortly thereafter. His imagining was of himself lying in his own bed surrounded by his wife, his siblings and his children. He would thank each of them for sharing his earthly journey, close his eyes, and go to sleep, never to awake again. Unfortunately, the pills did not work as intended. A half hour later he awoke. Opening his eyes, he looked around. “Oh no!. They didn’t work, did they? I’m still alive, aren’t I. Oh my God, this is really terrifying!” For the next two hours, he lay in bed in a state of sheer terror. There was no going back. Death was in the room, but it was taking its own awful time to claim him. His imagining of the good, controlled death certainly did not help him avoid the terror of dying.

Others have been more successful. Perhaps that’s because they were less afraid of dying than of living a life of extremely limited mobility. My husband’s father was a dedicated surgeon. He suffered a small stroke, and realized that another was probably going to occur. If it did, it would render thim incapable of operating and possibly unable to even attend to the activities of daily living. Unable to imagine himself as an invalid…..invalidated, in his mind…..he chose to die in manner and on a day of his own choosing. On New Years Day, he rented several television sets, bought a fine bottle of single malt scotch and filled a crystal bowl with barbituates. As he watched the football games, he sipped the scotch and swallowed the drugs. Just before half-time, he dropped the half full glass on the floor, slumped down in the leather arm chair, and died.

Controlling one’s death through suicide does not comfort everyone, however. There are people who are so afraid of dying, so utterly incapable of imaginging life on this planet without them in it, that they invest all of their physical and psychological energy in staying alive. They are effectively incapable of imaginging a good death. To them, death is unimaginable. Like Susan Sontag, whose death is vividly portrayed in The Violet Hour, they create a mythology of themselves as extraordinary people: people who are so exceptional that even death cannot defeat them. Regardless of their doctors’ prognoses, they believe they will “beat the odds.”

I feel sorry for these people, and for their refusal to even try to imagine their own deaths. They never learn to co-exist with the very human fear of dying. They make it more difficult, in Katie Roiphe’s words, “to get through the terror” by realizing they have no choice but to do so. As she says in the end, “Grace finds you. Acceptance hunts you down.” 2