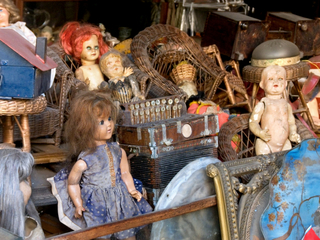 As I relate in Widow’s Walk: A Personal Journey through Loss, Fear, Anger and Love, I was widowed at the age of thirty-four when my husband’s damanged heart stopped beating. For the next year, I fluctuated on an almost daily basis between being certain I could deal with the immense challenges that my young family, and a castaway caught in a bog of despair. My emotions were raw, shifting from fear to anger to grief. One moment I was confident; the next, despairing. I tried to bolster my confidence and stay out of the grips of despair by reasserting control over an otherwise chaotic life. That took the form of creating endless to do lists, and then foricng myself to complete them even when, or especially when, the natural flow of events suggested I should put my attention elsewhere. Central on those lists was the de-cluttering of my spaces.

Clutter, and the confusion and sense of disorder it created, were a sign to me that life was out-of-control. I convinced my friend, Amy to run a tagsale with me. As I explain in Widow’s Walk, “Against the advice of John, the accountant, who sensed that my judgment was still shaky, I had decided to get rid of all presumably unnecessary possessions. Clutter troubled me, and I had begun to see it wherever I went. Things that had sat on top of the kitchen cabinets for years suddenly became junk in my eyes. Knickknacks I had once regarded as treasures began to look like unnecessary debris. I felt burdened down by possessions...”

As a result of the sale, my counterspaes and the tops of my cabinets were free of clutter. Having clearer, cleaner spaces helped to calm my troubled mind a bit, but only a bit. I realized I needed to do more than declutter. I needed to reclaim the spaces Bill and I had shared, and make them mine. His death has forced me to adopt the identity of the young widow. But that was not enough. I had to redefine myself as an indivudal identity, separate and apart from the woman I had been when Bill was alive. “I needed to begin thinking of myself in a new light: not as Mrs. William Miller, but as Pamela; uniquely and separately, Pamela. I was now single, no longer married. Our closet had to become my closet. Our bureau had to become mine.”

I began with the closet in the master bedroom. Explaining to his brother why I was compelled to get rid of my husband’s clothes so soon after his death, I said, “It's as though I can't even begin to start my life over until that is done. Bill's clothes will drag me down each time I open the closet door. No, I've got to force myself to get rid of his things soon.”
It didn’t stop with his clothes. I gave away his ukele, his bicycle, and his favorite records. I prevailed on my brother to help me repaint major sections of the house. It had to look like “my” house, not like “our” house. I obsessed over having two cars in the garage. I was now a single woman with two young daughters. That made us a one car family. Either I needed to sell his car, or get rid of my own and convince myself that I was a “BMW kind of woman.”

The need to put my own imprint on once shared spaces was even evident at the office that Bill and I had managed together. I rearranged the contents of the file cabinets and introduced all new administrative systems. I turned his office into a conference room. To the extent possible after a small firm loses its charismatic founder, I made the consulting firm “mine.”

Had time, energy and money permitted, I probably would have remodelled the whole house. My brother, who had come from Australia to help me, was very concerned that I was about to propose such an undertaking. Four years earlier, when Bill had suffered his first major heart attack and was not expected to survive, I had insisted that my brother reconfigure the entire house before I came home. I was desperate to avoid feeling overwhelmed by having to reenter the physical spaces Bill and I had once shared. Fortunately, he recovered and my brother was not put in the position of having to perform an overnight miracle.

My reactions to clutter and the design of my environment after experiencing a tragic and traumatic loss are not unique. I have a friend I’ll call Luna who was widowed three years ago. At first, she paid little attention to her surroundings. She was consumed with mourning She grieved deeply, and well. Toward the end of the first year, Luna began to find her way out of the shadows. One of her first instincts was to get rid of clutter. She cleaned out every closet in the house, getting rid of her dead hsuband’s clothes, books, and the medical equipment that had accumulated during his three-year battle with cancer. “I need to make my spaces more zen-like,” she often said to me. ‘I have too much stuff. It crowds me. It suffocates me.” She packed up the treasures her three grown children had left behind, and shipped it all off to them.

Slowly the personality of the house began to change. It begn to reflect Luna’sw individual tastes and artistic preferences. She became the artist who was painting the canvass as opposed to the curator whose job it was to look after the artwork that had been created by her husband and children. She realized that the spaces that had worked for them no longer worked for her. She hired a contractor to tear out the back of the house and install floor to ceiling windos and sliding glass doors. She got rid of her old furniture and bought new pieces to reinforce the zen-like atmosphere she craved.

Luna made decisions that she wouldn’t have made or perhaps have been allowed to make in the role of “Mrs.” Aware that her dead mate would not have approved of the remodel, she temporarily turned his picture to the wall. She allowed him to face the room only after the work was done, and she was ready to reveal her new spatial masterpiece to him. She smiled as she did so, certain that he would have celebrated her growth as a human being. Luna knew that he would have understood that getting rid of the clutter of the past and reshaping her physical environment had helped her make that critical transition from grieving widow to life-celebrating independent woman with a newfound sense of self.